The talented winners of the prestigious Star STEM Challenge competitions have been announced.

At the beginning of June, Star Academies launched its Star STEM Challenge competitions to inspire pupils across all 28 of its schools.

The Challenges gave pupils the opportunity to immerse themselves in science and explore the world around them. The competitions were split into four age categories for pupils at its primary and secondary schools.

Pupils in Reception and Key Stage 1 (Year 1 and Year 2) took part in a bug hunt to discover the world of creepy crawlies and insects. Key Stage 2 pupils (Years 3 – 6) explored the universe as they prepared for an adventure to the International Space Station. Secondary school pupils were challenged to create a model or toy to explain a scientific concept, using nothing but recycled materials.

Hundreds of young scientists from across the country entered the competition, which provided pupils with a fun focus to help foster positivity during lockdown. Judges were impressed by the quality of the entries which they said demonstrated a high level of ingenuity and learning.

After much consideration, the judges selected three winners in each age category from among the hundreds of entries.

First prize in the Reception and Key Stage 1 category was awarded to Zayneb Kherrab from The Olive School, Hackney. Zayneb impressed judges with her wonderful investigation into the world of bees. She created a lovely story all about bees and nectar and was awarded an Outdoor Explorer Kit in recognition of her wonderful effort. Second prize, of a Bug Safari Kit, went to George Foster from The Olive School, Bolton and third prize, of a My First Big Book of Bugs, was awarded to Alya Khan from Thornbury Primary Leadership Academy. 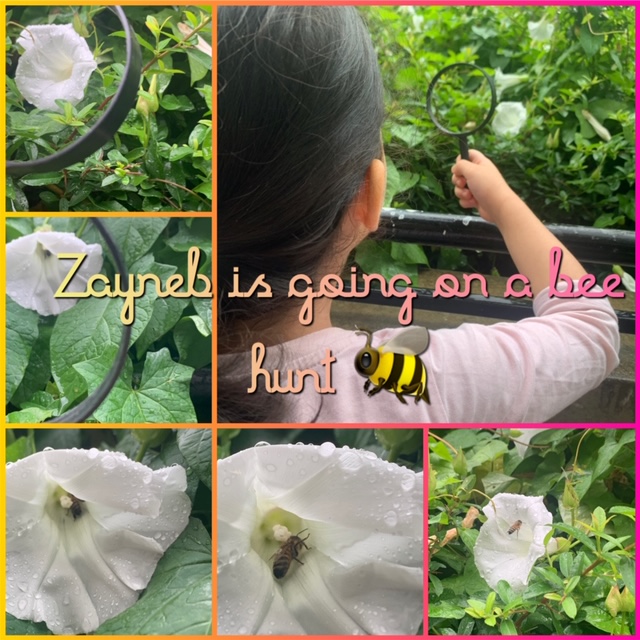 KS1 winner, Zayneb, impressed judges with her wonderful investigation into the world of bees.

Star judge, astronaut Helen Sharman had the unenviable task of selecting the prize winners in our Key Stage 2 space adventure challenge. Helen Sharman, who was Britain’s first astronaut and the first woman to visit the Mir Space Station, lent her expertise to help select the best space-themed entries.

She said: “This was a fantastic project that required research and thought, with many different ways for the children to show their knowledge, ingenuity and creativity. I enjoyed seeing the shortlisted entries, with their various presenting styles and techniques.“

In this category, the first prize, of a telescope, was awarded to Maria Modan from The Olive School, Blackburn. Maria’s mission to space was exciting and contained detailed models, fitness plans and even a guide to Earth for an alien. 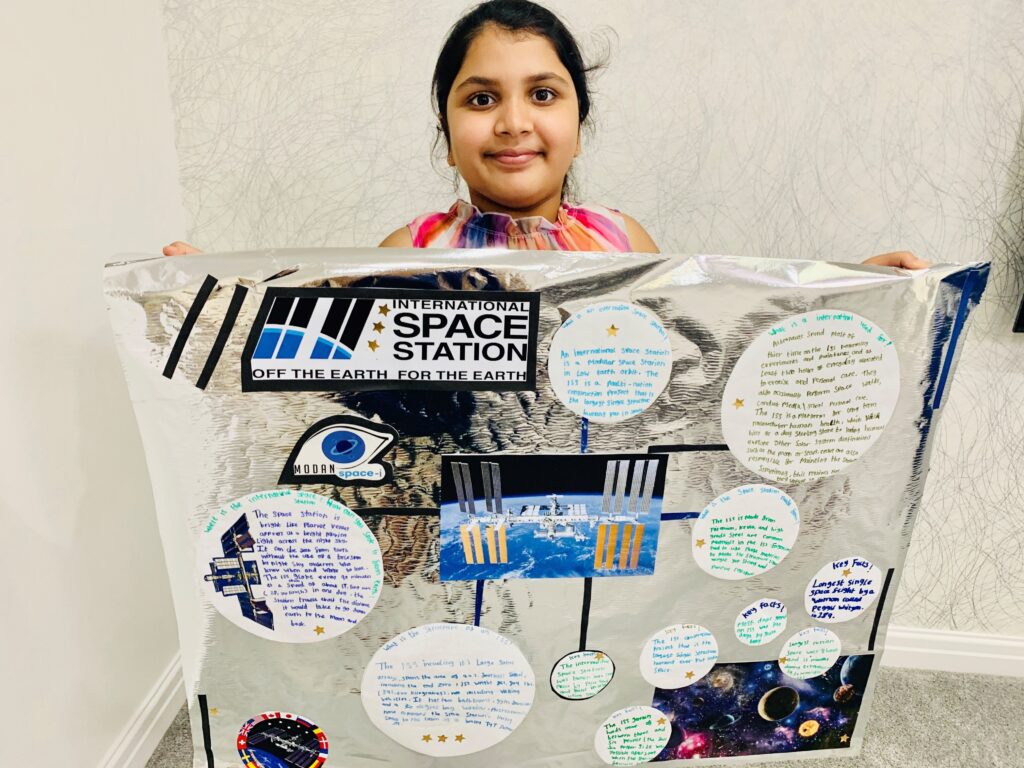 Maria Modan shows her winning entry in the KS2 competition.

Second prize was won by The Olive School, Small Heath pupil, Amira Tahir, who was rewarded with a night sky projector and third prize, of a solar system night light, went to Zaynab Adam from The Olive School, Bolton.

In KS3, the winning prize was awarded to Huzaifa Patel from Tauheedul Islam Boys’ High School for his inventive idea based around hand sanitiser. Judges felt this invention showed a great response to the current COVID-19 crisis as it aimed to help the population during the pandemic. It was well planned and Huzaifa’s presentation explained its purpose clearly and showed how the science supported its operation.

The KS4 winner is Zikra Al Shameria from Eden Girls’ Leadership Academy, Birmingham for her exceptional depiction of a biome, which examined tropical rainforests as an example of an ecosystem. Zikra gave excellent examples of food-webs and identified the importance of biodiversity. 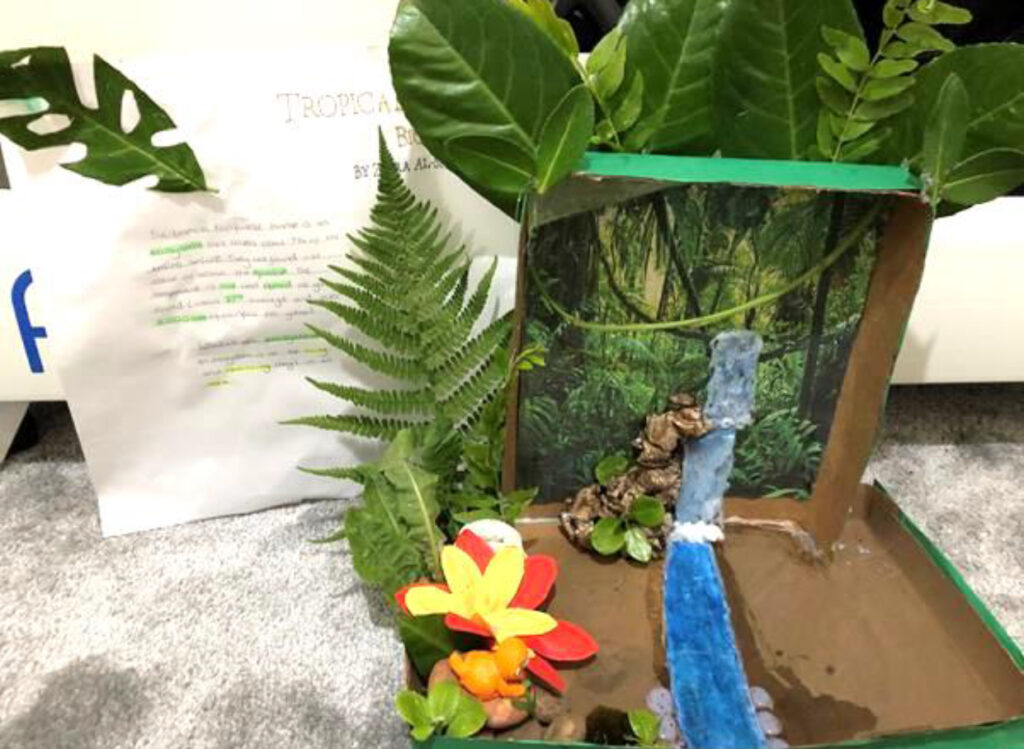 Zikra’s winning entry in the KS4 category was this wonderful tropical biome.

(Mufti) Hamid Patel CBE, Chief Executive of Star Academies, said: “I would like to thank and congratulate everyone who has taken the time to enter our Star STEM Challenge competitions.

“The creativity, attention to detail and scientific knowledge demonstrated by our pupils are truly impressive. The STEM Challenge is another great example of the incredible spirit of our pupils who, during these extraordinary times, are continuing to achieve and learn about the world around them.

“We are always overwhelmed by the enthusiasm of our pupils, parents and teachers when we set new challenges, and our pupils’ unwavering commitment to learning remains a guiding light to all of us at Star Academies.”

Congratulations to all of the winners and finalists who are listed below.

Star Academies staff have been baking up a storm with a special lockdown coffee morning to raise funds for Macmillan Cancer Support.

A ground-breaking and innovative new leadership programme for school leaders, fully funded by the Department for Education (DfE) for its first cohort, launches this month.