Asiyah was appointed an Officer of the Order of the British Empire (OBE) for her services to education in recognition of her 30-year career in education, during which she has helped to lead change and improve outcomes for thousands of pupils. 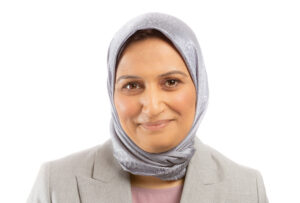 Asiyah has worked in secondary education for nearly three decades; first as a classroom teacher then as a Head of Science in Small Heath, Birmingham. Under her leadership, pupils achieved science results in the top 1% of schools nationally. Asiyah was soon seconded to Birmingham Education Authority where she used her experience to work as a Science Adviser, supporting underperforming schools across Birmingham to improve their science provision for pupils.

In 2008, Asiyah joined Waverley School as an Assistant Headteacher. The school had  been deemed a ‘National Challenge School’ due to low attainment. Within months of joining, Asiyah was promoted to Deputy Headteacher with responsibility for standards and school improvement. By 2010, the school’s Contextual Value Added scores placed the school in the top 5% of schools nationally. In 2010 the school was also deemed ‘Outstanding’ by Ofsted, the first national challenge designated school to achieve this. The school remained ‘Outstanding’ for the duration of Asiyah’s service at Waverley.

Both Eden Girls’ School, Coventry and Eden Boys’ School, Birmingham have been graded ‘Outstanding’ by Ofsted.  In 2019, the schools were also rated by the government as the second and third best secondary schools respectively in the country for the progress made by pupils.  Eden Boys’ School, Birmingham has also secured the best pupil attendance in the country for three consecutive years.

Under the Fairer Schools Index, a measure of ‘adjusted Progress 8’ which incorporates pupil deprivation, Eden Boys’ School, Birmingham was ranked the best school in the country for progress in 2019.

On learning of her OBE, Asiyah paid tribute to her late father, who had encouraged her to study and work hard and not allow her gender to be a barrier to higher education and achievement. Thanks to his support, Asiyah was inspired to aim high and achieved a 1st Class Honours degree in Chemistry from Queen Mary University of London.

She said: “I am incredibly grateful for this award which has been made possible thanks to support from my family, children, friends and colleagues.

“Throughout my career I have been extremely fortunate to work with some very talented educational professionals. Their passion helped to spark change and inspire developments that have led to improved outcomes for pupils across the West Midlands.

“I hope that this OBE will help to inspire other education professionals who follow, so that we can all continue to help young people strive to become the very best they can.”

Schools Feed Thousands During ‘Food For All’ Week

The generosity of Star Academies’ staff, pupils and families warmed the hearts of stricken communities and fed thousands of people during a special, week-long, ‘Food For All’ campaign.

The generosity of Star Academies’ staff, pupils and families warmed the hearts of stricken communities and fed thousands of people during a special, week-long, ‘Food For All’ campaign.

A ground-breaking and innovative new leadership programme for school leaders, fully funded by the Department for Education (DfE) for its first cohort, launches this month.